Why Use Animated Video?

Why Use Animated Video?

An animated corporate video is the perfect way to help businesses tell their story in a more comprehensive, fun and engaging way.

This is because 65% of people are visual learners, and 90% of the information transmitted to the brain is visual. According to biologists, vision dominants our senses and takes up half of our brain’s resources. And because we allocate so much of our brain to visual information, we process video 60,000x faster than text.

Here’s a little test if you don’t believe me. Out of the two images below, which one is easier to comprehend?

And that’s why there’s been a huge shift towards video content on social media. People love video and that's why the number of video posts per person has increased 94% just last year in the US alone. On top of that Facebook now averages more than 4 billion video streams every single day.

Still not convinced of the power of animated corporate video? Here are some statistics that will blow you away:

If video isn't part of your marketing strategy yet, then there is no better time than now, to start leveraging animated video.

It’s getting hard for companies to cut through the noise and grab viewers' attention, a plain ol’ video just won’t due anymore. Another boring video with words pasted on top just won’t do the trick like it used to. You need to grab attention and drive engagement, and animated video will help you do just that.

The majority of consumers would rather watch a video than read. Because of this, it will lead to a video explosion in content marketing. Video will be used more broadly and will be used all throughout the customer journey.

There will be lots of testing to find out which videos work best in different situations. Live-action, animation, talking heads, testimonials, CGI. How to grab attention, present introductions, information, hooks, and calls-to-action in a video. But animation is the most potent in this mix.

Internet users have increasingly short attention spans. Animation is great at grabbing attention and engaging viewers by evoking emotions that resonate. It feels more like they’re having a conversation with your brand and that makes your audience want to follow the story.

Not only that but people are so used to intrusive and pushy marketing ads that they often glaze over and zone out when presented with a bland ad. And this is why animation works so well, it is a less known marketing instrument so people are more likely to engage with animated video than traditional ads.

Google Doodles are a great example. Their animations just make us want to engage and view them.

Animated video can bring concepts to life that text or standard live videos just can’t. With animation, your creativity is the only thing holding you back; you can make your characters talk all you want, fly, or travel in time. Animation for businesses is also one of the best ways to visually show how your mechanisms, processes or technology works.

TED-Ed is a great example of how animatin can be used to simply explain complex topics. If you are not signed up to their YouTube channel yet, it’s just about time. It has over 3 million subscribers and is one of the most popular educational channels on YouTube. Most videos created by the team use animation. It simplifies otherwise difficult topics like how the food you eat affects your brain or the physics of the “hardest move” in ballet.

People love being entertained, even if they talk business or get educated. The more entertaining your video on YouTube, Facebook, and other social media channels, the more people will share it. Especially as a business, animation adds 10 points to the entertainment factor.

Animation Fits for Just About Anything

Animated corporate video works fine for any marketing need product explainer videos, infographics, and release announcements. Marketers from prominent companies recognize the trend. This explains why out of 50 best explainer videos collected by HubSpot, Video Brewery and Switch Video, only 7 are non-animated.

Animation Is Relatively Cheap to Produce

One of the major advantages of using animation for your social media channels is that it is less expensive than live videos. Video production would involve spending thousands of dollars. Searching for a spokesperson, actors, shooting and cutting the film. Instead, you just need a fraction of this effort to create a perfect animated explainer video.

How Powerful Will Video Marketing Become?

By the end of 2018, consumer internet video traffic should be at 79% of all internet traffic across the world. Video will dominate the internet. Video will be the primary medium for how internet users will consume information. 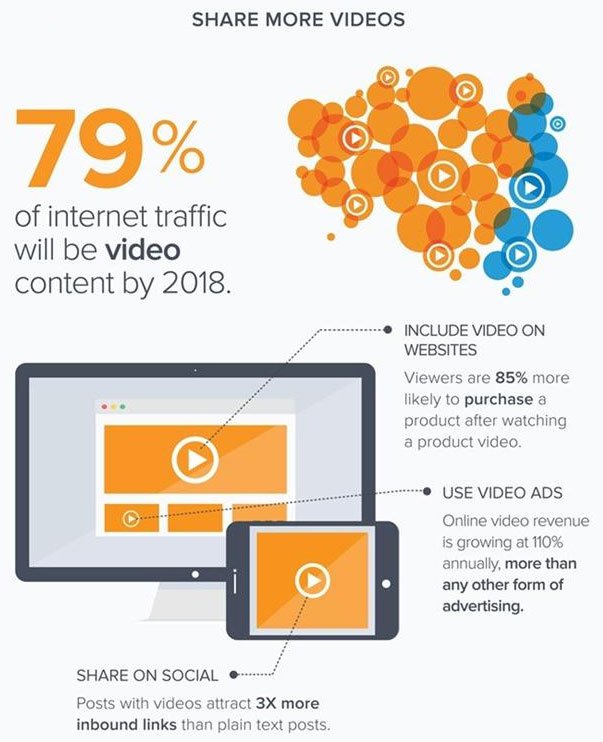 Video marketing is the future

To Cut the Long Story Short…

Video is a powerful marketing tool, and animation is a trending video type you don’t want to miss on. Animation might just be the thing your business needs to get viewers, likes, and shares. It appeals to the audience and markets on emotions. It also has dozens of use cases and is easy to create.